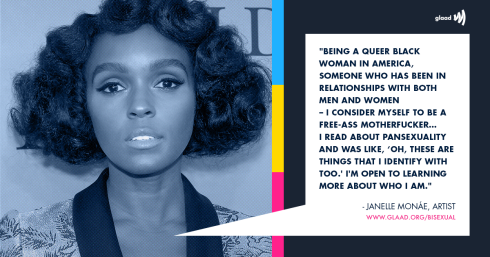 My inspiration for this piece was Janelle Monáe talking about her discovery of pan-sexuality & I was like yessssssss! So here we go :

As a black bi-sexual woman, I live at the intersection of injustice. I have had to be both elephants in the room.I have had to be a voice of insight, and a modest matter-of-a-fact speaker. My rhetoric always coming out as general knowledge. Always speaking ” the LGBTQ community…”, knowing damn well I was speaking about me, and us. I feel empowered by Monae’s courage and confidence to live in her truth in a world that would rather you be silent.

I remember being 12 or 13 years old and I was interested in what sexuality was. I guess I had googled ‘sexuality’ because I knew that I was attracted to both men and women. I read that there was an array of identities in which people identified with. I remember being so excited because I had found what I most closely related to, and that was pan-sexuality. I remember spinning around in my computer chair to face my mom and I told her that “I’m a pan-sexual!”. I said so with such urgency and excitement, because there it was…this exposition for the feelings that I had. She said “Alright, what’s that?”, and I told her “it’s when you believe that love is love, and it doesn’t matter if its a boy or a girl…”. I don’t remember her response, I just remember being so happy and joyful in that moment. I remember feeling too that, God had given me an even greater capacity to love.

I felt blessed that I could love more people than other people could.

I think now, that wow I was a deep ass 12 year old, but I think that when you’re that age, you are nothing but truth and innocence. I never thought that my sexual identity would be a problem, or be anything to be ashamed about. I hadn’t known that homophobia was a real thing, and I didn’t know that people would reject you just because of who you choose to love. I had just felt extremely blessed that I could love anyone, and especially those who have felt unloved because of their sexuality and/or gender identity.

I had always known that I was attracted to women in the same way that I knew I was attracted to men. I think I tried to repress my feelings for women because I was scared of what people would think. My earliest memories of ‘coming out’ to my peers, mostly resulted in responses like, “Can I see you guys kiss?”, “You’re too pretty to be gay”, and “Oh, you’re a carpet muncher?”

(The carpet muncher one was my favorites, because I was like, is it really like eating carpet? lmao)

I internalized a lot of the homophobic comments said to me which made me feel ashamed about my sexuality. My relationships with women and men also suffered greatly on behalf of me being uncomfortable with my sexuality. When I was with women, they really wanted me to show them off, ya know, like anyone would want to be shown off, and I never would. I didn’t even want to kiss in public, or hold hands. I didn’t want to make people feel uncomfortable. I always told myself I wanted to be so sure that this person was who I would spend my life with before posting them on social media or before introducing them to family *because* if it didn’t work out, people would say “yeah it was just a phase” or invalidate the relationship as a whole. I always felt like I needed to prove that my relationship was authentic and real, because of the projections of incredulity from other people.

The most common question I get asked by people who are discovering their sexuality is, “How did you come out?”. Well, I never did ‘come out’. I never felt the need to, I mean sometimes I did (pressure from partners), but I never really cared to do like this whole elaborate weird thing of announcing “hey I like girls”, in the same way that straight people don’t go around saying “hey I’m straight”. I understand why people do ‘come out’, which is usually for acceptance, but I’m now 24, and as long as I can accept me, I’m good.

I think people have this idea that bisexual people like men more, or like women more, and that may be true for some people but for me, I just go with the flow, it doesn’t really make a difference. Some people also think bi-sexuality is just the pathway to becoming a lesbian, or a phase that one grows out of; Both ideas have played a tremendous role in how I thought about myself. I questioned a lot if I was just going to be a lesbian, or maybe I wasn’t bisexual at all, and I just liked *this* person.

I do have this controversial opinion of mine (backed by social science) , that sexuality is really just a social construct, meaning – heterosexuality is the norm because our society says it is, and thus people fall in line. I believe that innately we as human beings, our sexuality is fluid and if we did not have these social constructs, majority of people would fall more fluidly on the sexuality spectrum.

( Terms I think it’s important to be familiar with )

Cis-gender – a person whose sense of personal identity and gender corresponds with their birth sex. (I.e. you were born a boy and you feel like you’re a boy)

Trans-gender – a person who does not identify with their sex assigned at birth.

** big point I want to make here : GENDER AND SEXUALITY ARE DIFFERENT.

I usually identify myself as bisexual when the question arises, just because a lot of people are unfamiliar with what pan-sexuality is, and it averts any following questions. There has been a lot of ambiguity in the community on what the difference between bisexuality and pan-sexuality is. For me I choose to identify with pan-sexuality because it is inclusive to all gender identities whereas with bisexuality their attraction is solely to cis-gender men and cis-gender women.

I know that people get really confused on sexuality and gender identity, and a lot of people don’t understand it, but I think it’s important that we as a people do our research to understand its’ complexities. People will dismiss conversations as soon as they feel like its ‘too much’ or want to invalidate someone’s identity. I started in-depth research a few years ago, as I began to learn about the alarming violence against transgender women- more specifically black trans women. I don’t know where all the hate comes from, but I think the first step is awareness and education, and I think that is everyone’s civil obligation.

My Struggle of Being a Bi/Pan-Sexual Woman

I use the terms bi/pan/and gay interchangeably to describe my sexuality. In safe spaces, and with people that I trust, I don’t mind being specific about my sexuality. In every other space I feel a sense of security by using ambiguous umbrella terms to describe my sexuality. I feel like it serves as a security blanket. I don’t feel like I need to say I’m ‘pansexual’ because I don’t think specificity is needed in order for my sexuality to still be valid. Some days my sexuality is unclear to me (If I’m being honest), and being able to use different terms interchangeably gives me a sense of freedom from feeling boxed in & labeled.

Thank you so much!